It's getting exciting. This Thursday we have the last semi final to secure for one talented band a covetted place in the grand final on the 8th March.
This weeks semi finalists are:
The Beautiful Sleazy
Free Will & the Bad Influences
Final Epitaph

So we're in for an exciting night. For any fans of the bands I urge you to turn up and vote. The audience vote is absolutely vital and as in last weeks competition one extra vote from the crowd could have changed the outcome completely. So be warned.

We're also excited to tell you that this week we have a special guest appearence of the legendary Jack Brown who will be on stage after the competition to entertain you while the votes are being counted. So that's another great excuse to turn up.

And while we're at the announcments have you checked out the Unity myspace? on it you'll see our lovely calendar and you can marvel at how hard we've been working on your behalf. Gasp at the wealth of talent we've lined up to entertain you. We've got james Chadwick, Opaque, Acer, Point 7 Pistol, Gaia, Fabonacci, Mr Zed, Groove cartel and many more great bands and artists. There's some cracking line ups already and more to come so keep watching. As we finalise the deals we'll post the dates.

We've got a few projects in hand with the BBC not least securing airplay for the best bands of the Band of 2007 Competition. As and when other things happen we'll let you know.
Finally myspace of the week this week goes to John Russell
have a listen to his sublime acoustic guitar playing and great voice and have a look at his entertaining site complete with videos archived songs what more could you ask for? Go have a look you know you want to.
Until then.....

Peave love and Unity from the Unity Office
Shaggy, Mike and Craig.
PS Craig our new public relations man is P'ed off because we haven't got him his own desk in the office yet. Why does he need a desk when he's always up making us coffee? That's the way it is, you start at the bottom and work your way up. Rock on.
Posted by Mike Da Hat at 3:52 pm No comments:

The competition goes on and it's getting more and more intense as the weeks go by. As we get closer to the final and the covetted first prize of hard cash in the relevant grubby little hand the bands are giving it everything. All except maybe Alpha Road who despite getting through to the semi finals chose not to turn up for reasons best known to themselves, whichis a shame because lots of people thought they were pretty cool. Anyway Intwined turned up and having fully integrated their new drummer into the band proved to be better than ever, recieving rapturous applause. It's those Brackets again. How many times do we have to say that we're impressed with these guys, not many more because they got through to the semi final and got even more rapturous applause from the audience. And so to counting the votes, meanwhile to keep you all entertained the impossibly tall and bizarre John Litchfield.

Hello I know you only log onto this site to see yourselves and see how great we've made you look in the photos. Hmmmm some of you even get a facial makeover before publication. It's like being on telly. Aye caramba here you are. The voting was very tight. The audience vote was split with identical amounts of votes for both bands. The Judges were split one judge for Intwined one voted The Brackets and the third had it as a draw. So what to do. Well Shaggy got out his Texas scientific calculator and with the use of calculus and integrated equations tried to find a winner. Finally with only one point difference, but someone has to win and someone has to lose, The Brackets win a place in the grand final. They can smell the money already, except of course they compete against Revenue who were sh*t hot last week and the winner of the last semi final next week which features Free Will and the Bad influences, The Beautiful Sleazy and Final Epitaph.

That's thursday March 1st next week. You'll be sorry if you miss it.

Rock on dudes.
Posted by Mike Da Hat at 3:38 pm No comments:

As befitting a semi final all the bands were on top form and the audience turned up in droves to support. First on stage tonight were Pattern Of Sin who surprised the bejaysus out of everyone by winning their heat a few weeks back.

Oh my word those "End Of The Day" boys (and girl) rocked it out with a great set and an impressively manic finale, I was waiting for them to set fire to their guitars and smash them up, but it was great to see Danny rolling around the floor. Brilliant.

Highest scoring runners up turned up in party mood. I'm not sure if they thought they were going to lose or what but they were going to make sure they had a great time. They played like they were possessed by demons, as the set went on it became apparent to everyone they were doing something right and the crowd went wild dancing and cheering, at this point I think even the band themselves knew they'd cracked it and stepped up a gear and went even crazier. Needless to say Revenue have come back from the dead and proved that being a runner up doesn't stop you getting to the grand final. Well this is what you've been waiting for. Pics of you lovely people having a great time. Don't forget next weeks semi final features The Brackets, Intwined and highest scoring runners up Alpha Road so it's going to be another cracking night.
May I remind the bands that the audience vote DOES MATTER they do make a difference so bring a crowd. You knows it.
Posted by Mike Da Hat at 1:07 pm No comments:

Here at Unity things are hotting up in the heats. First on stage this week Our Mutual Friend. Now I wasn't a judge but if I were I'd be carlsberg judge for these guys. I thought they were pretty damned good. But what do I know? Next up a last minute entry, I say last minute entry into the competition it was really eight hours. Death Metal boys "Final Epitaph". Now I'm not a huge fan of Death Metal, I stand their thinking I need a hearing aid because I can't make out the words. But it's got to be said these guys can actually play guitar and bass and as it happens the drummer was a bit tidy too. Our final act of the night was Alpha Road who came all the way from Cambridge to compete, a bit nervous at first but soon settled into some decent tunes with words you could hear. So I guess a few people were gutted and a few more very surprised by the result. The Death Metal combo Final Epitaph make it to the next round. But credit where it's due technically they were brilliant. Oh and young James Chadwick turned up to entertain us while the votes were being counted. So that's twice I've heard him tonight once on the radio and once live. Do you think he might be getting famous? We'd better put a stop to that right now. Don't forget next week is the first of the semi finals with Pattern of Sin, End of the Day and Revenue. It's gonna be great I tells you.
Posted by Mike Da Hat at 3:23 pm No comments:

Heat 5 and we're on a roll, minus the Shagster who buggered off to cambridge being famous an all. First on stage in this heat was Sever the Wicked, always entertaining , always manic and of course they destroyed the stage, well who wouldn't. 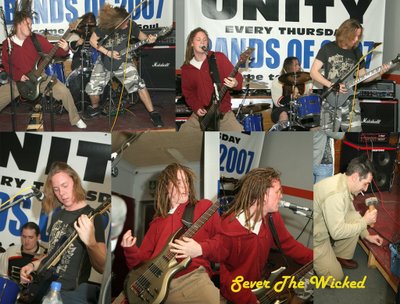 Oh yes the good ol' boys Sacred Heart, pumping out solid rock for everyone to love. 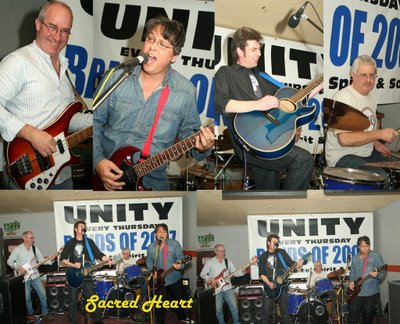 Finally on stage, From St Neots, The Beautiful; Sleazy. It's not often that you witness something special, but tonight we did. This was just their fourth ever gig and you would never have guessed it. The crowd screamed for more. Now rules is rules and competition rules say no encores, but hey rules are there to be broken so they went on again. 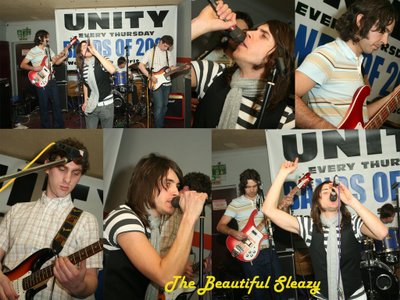 Needless to say The Beautiful Sleazy won the day and go on to the next round.