Hot Hot Hot but who's complaining. Not me. Not when we've got great music to listen to. After amazing us with his incredible skill on the sofas last week Shaggy invited Michael Parker to play a proper set for us. He didn't disappoint.

Now we've seen young James out and about before, but never like this. Here he is with Mark and Carolyn with their new band Sympathy For Mr Vengeance. Not since Tarantism have we seen so many people up and dancing. With two PC's providing backing tracks and a back screen projection of Japanese Manga cartoons these three produced some amazing techno dance sounds, even more amazing when you consider it was only their second ever gig. I talked to the guys after. They tell me Carolyn hasn't finished writing. IN the future it's going to be much better with songs and back screen melding seemlessly from one song to another. 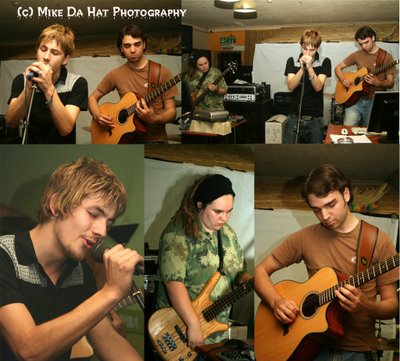 In a lot of bands you've got a great front man who has all the personality and the rest watch their feet. Sometimes I despair because you've got a band of obvious talent and they don't entertain. You can't say this about Sidearm our third act of the night. here we have four guys hell bent on enjoying themselves on stage and don't they want you to know it. The first time I saw Sidearm they were good but a little rough round the edges. The second time they were better. This is the third time I've seen them and they have matured, they are solid, incredibly well rehearsed and professional. How many times have you seen a change over of drummers and the beat never stops. Brilliant. How many times have you seen a drummer who then blows you away with a blazing guitar riff? Or a brilliant front man who then steps back to be an equally brilliant drummer? These things and more make this band special.
Laydees and Gennulmun here's Sidearm.... 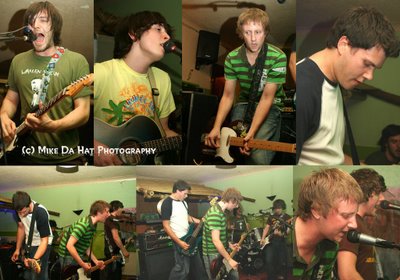 OK you want it, you've got it, the papparazzi pics, including bottom left Charlene, and er ... damn I washed my hands and now I can't read the other names. That's me off their Christmas card list already.

Diary dates for you to make a note of: